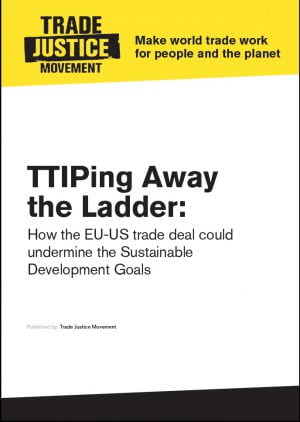 TTIPing Away the Ladder: How the EU-US Trade Deal Could Undermine the Sustainable Development Goals

The United Nations has developed a set of Sustainable Development Goals (SDGs) that world governments are expected to use to frame their political policies over the next 15 years. At the same time, the world’s two largest trading blocs – the European Union and the United States – are negotiating a major trade pact – the Transatlantic Trade and Investment Partnership (TTIP) – aimed at achieving ambitious cuts in trade barriers and investment regulations. This briefing argues that these two processes are incompatible and that TTIP could undermine the world’s ability to achieve the SDGs. Developing countries have not been involved in the TTIP negotiations – a scandal in itself – but TTIP will revise trade and investment rules between the US and EU that are very likely to become global standards; these will undermine developing countries by further forcing open their markets to US and European companies.