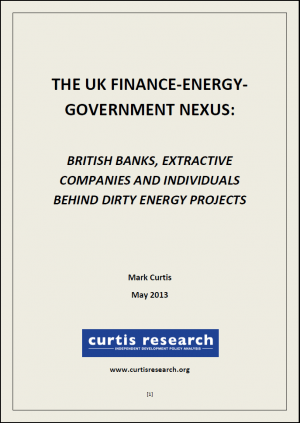 This briefing, based on research commissioned by the World Development Movement, outlines the role played by British companies in controversial energy projects in developing countries. It shows the nexus of interests, and revolving door, between these companies and former and current civil servants and Ministers. Many British companies currently promoting dirty energy projects are managed or advised by former British officials. Furthermore, senior executives in these companies serve on government-linked advisory boards which shape the UK’s financial and trade policies. The nexus goes to the heart of government. Several Cabinet ministers have past or present links to the energy or finance companies under analysis.