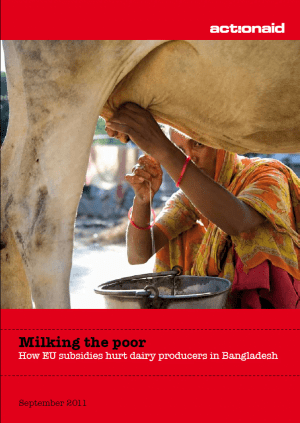 For decades, European dairy farmers have been given massive subsidies under the EU’s Common Agricultural Policy, which have enabled them to export cheap milk powder, among other products, on international markets at low prices. In 2005, the EU decided to change the nature of those subsidies by ‘decoupling’ them from the production levels of farmers. This report shows that the EU’s decoupled subsidies are continuing to hurt dairy farmers in Bangladesh, where millions of poor people support their low incomes through milk production. Dairy farming is a potential pathway out of poverty for millions of Bangladeshis, but imported milk powder is undermining Bangladesh’s dairy farmers by undercutting local producers of fresh milk and domestic processors of milk powder.