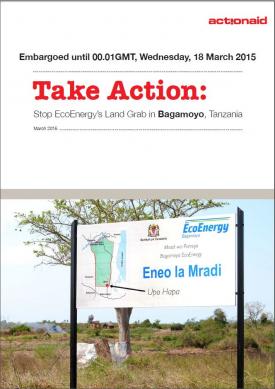 Rural communities in the Bagamoyo district of Tanzania are opposing a much-lauded sugar cane plantation project planned by EcoEnergy, a Swedish-owned company that has secured a lease of over 20,000 hectares of land for the next 99 years and which is about to push smallholder producers off their land. Although the company has conducted consultations with affected villagers, this research found the majority have not been offered the choice of whether to be resettled or not, and have not been given crucial information about the irreversible effects the project may have on their livelihoods and their rights to food and land. By failing to obtain the free, prior and informed consent of the communities in the area affected by the project, EcoEnergy is grabbing the land of these communities, or risks doing so. EcoEnergy’s plan to develop a sugar cane plantation is a flagship project of the increasingly controversial New Alliance for Food Security and Nutrition, the G8’s African agriculture initiative. 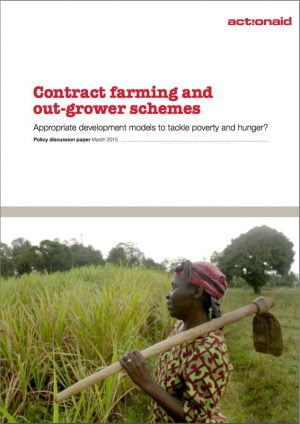 Out-grower schemes (often referred to as contract farming) are an important component of many current public-private partnerships in developing countries, including the G8’s New Alliance for Food Security and Nutrition. Such schemes can benefit farmers because the company often provides inputs and production services, incomes can rise, and such schemes often open up new markets. But they can also exclude the poorest people and women and give companies access to land that would not otherwise be available, thus being a disguised form of land grab. Farmers can often become little more than a form of cheap labour and carry most of the project risk. Many schemes are geared towards (often non-food) crops for export or large urban markets and tend to consolidate the role of large corporations in global agriculture supply chains whether smallholders benefit or not. This report argues that evidence suggests that most existing contract farming and out-grower schemes are not appropriate models to tackle poverty and hunger. 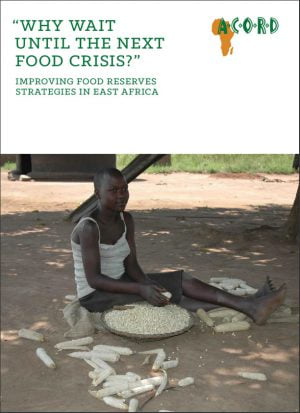 Why Wait Until the Next Food Crisis? Improving Food Reserves Strategies in East Africa

This report highlights the importance of African countries holding food reserves for promoting food security and price stability. It analyses the food reserves policies of three countries in East Africa – Kenya, Tanzania and Uganda – showing how these can, indeed must, be improved to address hunger. National food reserves, when designed and implemented effectively, can play a vital role in promoting food security and price stability. However, although most African countries currently hold food reserves, many are poorly managed, and some hold no stocks at all. Both Kenya and Tanzania hold sizeable grain reserves but Uganda holds none and has explicitly rejected doing so, stating that they are expensive and require careful management. Our analysis is that all three countries need to re-examine their policy on food reserves to improve food security for the most vulnerable. Policy towards food reserves should be seen as a complement to other social protection policies. 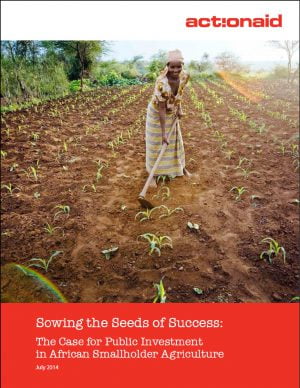 Sowing the Seeds of Success: The Case for Public Investment in African Smallholder Agriculture

There is an intense debate in development policy-making circles concerning what investments are needed to increase farm productivity in Africa. Donors and some African governments are increasingly turning towards the private sector, or Public-Private Partnerships, to provide investments, with such models seen not only as complements, but sometimes as alternatives, to increased public spending. This report reviews the literature on public and private investment in agriculture and argues in favour of increasing public resources to support smallholder farming in Africa. It analyses current (low) levels of public investment, gives reasons why public investment can be effective and outlines ten key ways in which public investment should be promoted to benefit small farmers. 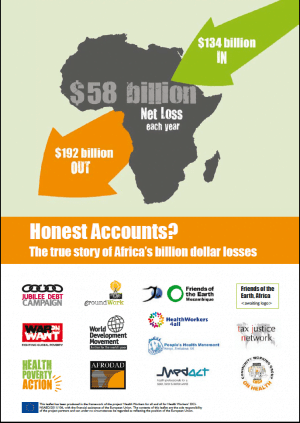 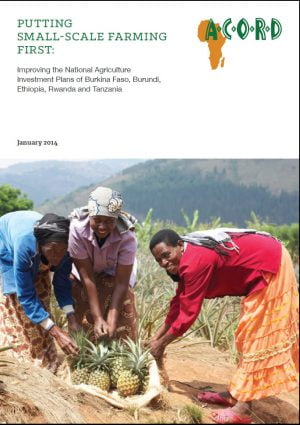 This report analyses the National Agriculture Investment Plans (NAIPs) of five countries – Ethiopia, Tanzania, Rwanda, Burundi and Burkina Faso – and assesses the extent to which they are likely to benefit smallholder farmers. The NAIPs are the flagship strategies of governments, outlining how they will support the agriculture sector in the coming years, and include ambitious spending plans. If the NAIPs are to transform agriculture, and promote broader development, they must focus on the people who do most of the farming – smallholder farmers. The report finds that, while the NAIPs of these five countries show a significant commitment to the agricultural sector, there are five key problems: insufficient prioritisation of the real needs of smallholder farmers; a poor focus on women farmers; a lack of explicit prioritisation of sustainable agriculture; unrealistic funding; and limited community participation in implementing the NAIPs. 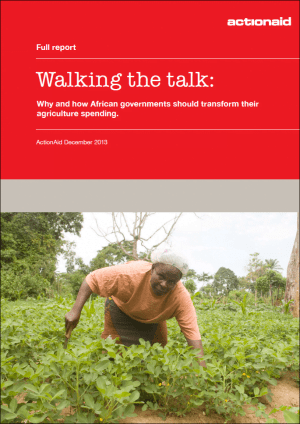 Walking the Talk: Why and How African governments should transform their agriculture spending

This report involves extensive secondary and primary research in seven African countries – Burundi, Ghana, Kenya, Nigeria, Rwanda, Uganda and Zambia. It examines how well focused governments’ agriculture spending is on promoting the needs of smallholder farmers, especially women farmers, and makes recommendations for far-reaching changes. It examines agriculture spending and quality, the lack of support to women farmers, the need to provide greater support to extension services, agricultural research, sustainable (ecological) agriculture and rural credit, and the need to improve transparency and participation in policy-making.

In 2003, African states pledged in the ‘Maputo Declaration’ of the African Union to spend 10 per cent of their budgets on agriculture within five years. Ten years on, African governments still allocate an average of only 5 per cent of their national budgets to agriculture. Only seven out of 49 African countries have consistently reached the 10 per cent target. This and other policy failings is holding back food production and food security in Africa, where 223 million people (a quarter of the population) live in hunger. African governments are largely failing the continent’s smallholder farmers, who comprise most of its people and produce most of its food. Women, who comprise most farmers and manage Africa’s food security, are being largely ignored.

African Heads of State and Government have designated 2014 as a Year of Agriculture and Food Security. Yet, like the Maputo Declaration, this will remain an empty phrase unless governments commit to walking the talk when it comes to agriculture spending. 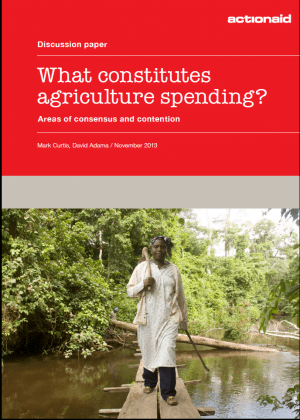 What Constitutes Agriculture Spending? Areas of Consensus and Contention 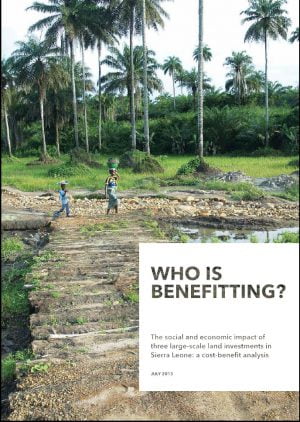 Who Is Benefitting? The Social and Economic Impact of Three Large-Scale Land Investments in Sierra Leone

Curtis Research contributed to this report, researching and writing section 6 and the Annex. This is an analysis of the revenue losses resulting from the large tax concessions the government of Sierra Leone is giving to agribusiness companies. The report calculates that Sierra Leone will lose around $188 million over 10 years in tax exemptions granted to three agribusiness investors alone – Addax Bioenergy, Socfin and Goldtree. The rest of the report examines the social and economic impact of large-scale land acquisitions managed by Addax, Socfin and Sierra Leone Agriculture. 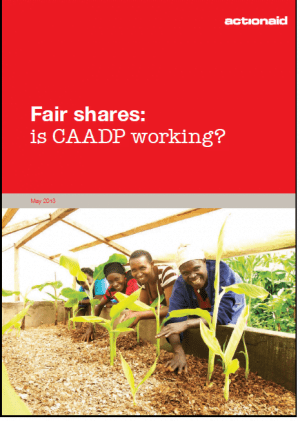 The Comprehensive Africa Agriculture Development Programme (CAADP), launched by African heads of state in 2003, offered the prospect of a new, intensified focus on agriculture throughout the continent. Ten years on, how successful has CAADP been? This paper offers a brief assessment, examining if agricultural budgets have increased, if the focus of spending has improved, and if CAADP is providing ‘fair shares’ to the millions of smallholder farmers who do most of Africa’s farming and produce most of its food.