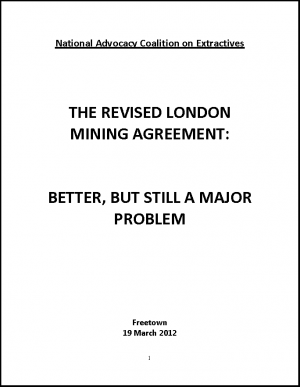 This briefing analyses the fiscal terms of the revised mining agreement between the UK-based London Mining with the government of Sierra Leone. It finds that while the new agreement is an improvement over the current one it contains 11 provisions inconsistent with Sierra Leone’s legislation while some of its terms are actually worse than in the current agreement. The new agreement should not be ratified in its present form, since Sierra Leone will unnecessarily lose badly-needed revenues. Increasing revenues from mining must be a top priority for the government, along with ensuring transparency in such revenues as under the Extractive Industries Transparency Initiative.